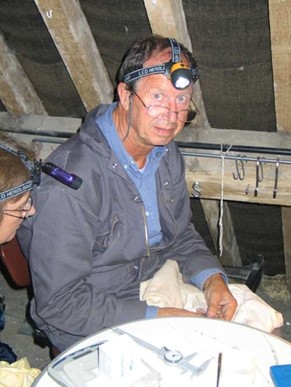 Roger in the attics at Woodchester observing the bats

The Woodchester bats have been studied by Dr Roger Ransome since 1959.

His work on the Greater Horseshoe bats is the longest continuous study of any mammal by a single person in the world.

Roger began the study when a student at Cheltenham Grammar School in 1956, and continued whilst at Bristol University. In 1979 he was awarded a PhD degree from Bristol for his published research, completed whilst a teacher. Now retired, but still very active in the field, he is an honorary researcher in the Bat Ecology and Bioacoustics Lab, School of Biological Sciences at the University of Bristol. Roger is one of the foremost bat experts in the UK and has an international reputation as an ecological bat researcher.

He has published over 50 scientific papers on bats, including contributions to two prestigious journals Nature, and the Philosophical Transactions of the Proceedings of the Royal Society. Much of what we know about Greater Horseshoes comes from his work, which for the majority of his career was conducted in addition to his regular employment. His researches at Woodchester are supported by colleagues in the Gloucestershire Bat Group and at Bristol University. He has also produced or assisted with a large number of other publications on the bats.

Roger is also the author of two books. The Greater Horseshoe Bat (Blandford Press) appeared in 1980 and The Natural History of Hibernating Bats (previously Croon Helm, now Thomson Learning) was published in 1990. He co-authored the Action Plan for the Conservation of the Greater Horseshoe Bat in Europe, a report forming part of the Euro-Species programme.

The Woodchester bats are known worldwide from Roger’s scientific papers at international conferences on bats. His research programme involves regular visits to the bat roosts to count and ring the bats, collect DNA samples and also dropping samples in order to analyse their insect diet changes. The results of this long-term, systematic and meticulous scientific study have been applied to bat conservation, enabling habitats to be managed to promote the survival of the bats.