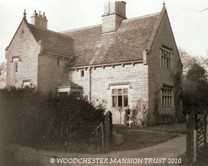 d 1865 respectively. They were both unmarried and steadfast supporters of the Catholic Church, particularly in the village of Nympsfield on the Woodchester estate. Blanche’s business acumen has already been mentioned, and she, and probably her sister, would have been much happier if they had been born a hundred years later and so able to direct their organising skills into a career. But upper class women did not go out to work at the start of the twentieth century, and Blanche had to step aside from her role in managing the estate for her father and her sick brother Frank when Vincent Leigh succeeded on Frank’s death in 1907. Her energies were channelled into helping the Catholic Church. The ladies were very attached to the estate and lived there almost all their lives, firstly at “The Cottage” from 1873 to 1907, and then in the Scar Hill lodge at the western end of the estate. They were very fond of dogs and, from surviving photographs, appear to have owned at least two at most times. Relations between the sisters and their brother Vincent were very strained when he sold Woodchester in 1922. 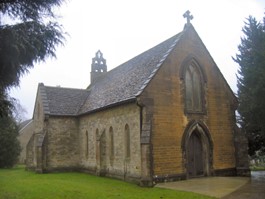 The sisters were responsible for the erection of St Joseph’s Catholic Church at Nympsfield – indeed they are reputed to have sold their jewels to fund it. The foundation stone was laid in August 1922, and the church opened in July 1923. The construction was carried out by employees from the Woodchester estate, led by Ernest Poulton. The project probably provided the Miss Leighs with a diversion from the bitterness of the sale. A “Leigh Memorial Chapel” had been proposed and sketches made by Charles Hansom as early as 1878, but presumably shelved due to the state of the family finances. St Joseph’s was designed by E. P. Dromgole, a Stroud architect, and there are some resemblances to Hansom’s earlier design. The Miss Leighs are also said to have assisted with building the convent and orphanage in Nympsfield, and the Catholic school. Miss Blanche Leigh left legacies benefitting the local priest and the school on her death in 1946. 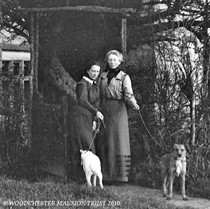 During the 1920s and 30s the school children in Nympsfield used the Mansion and adjacent grounds for school activities and games, and the villagers held events in the completed drawing room. In January 1935 Miss Blanche Leigh re-acquired the central 1000 acres of the Woodchester estate – the Woodchester valley and the Mansion and the adjacent farms. She had been receiving the rents from these farms since 1922 and so was entitled to own the land. Hence the Mansion became Leigh family property again. By this time the sisters were both over seventy, Ernest Poulton had retired and they did not want the responsibility of the estate. So it was put on the market. Blanche had hopes of selling the Mansion to a religious order, but this fell through. In December 1939 the property was sold to the trustees of the Barnwood House Hospital. The hospital catered largely for well off mental patients, and the lovely Woodchester valley was felt to be an ideal environment for them. The Miss Leighs’ brother Frank had been a patient there at the turn of the century. New accommodation blocks were planned for the patients, with the Mansion used as offices. A surviving letter from Miss Leigh regretted that the beautiful chapel would not be used for Catholic worship. However, she had a clause built into the sale to ensure that a separate hospital block with no less than twenty beds for male Roman Catholic patients would be built. This was to be staffed by Catholic nurses only and a Catholic chapel was to be provided. However, none of these plans came to fruition because the war intervened, and the hospital sold the estate on in 1953. 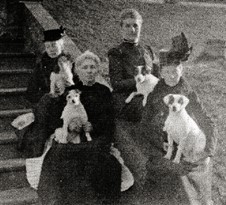 Blanche Leigh used the money she received from the sale of the estate to benefit the church and school in Nympsfield. She and her sister were involved with the activities of the Catholic church in the village all their lives. Blanche died at Scar Hill in 1946, followed by Beatrice in 1949, and both ladies are buried in the churchyard of St Joseph’s, Nympsfield. With the death of Beatrice William Leigh’s direct descendants died out. Maybe the ladies were regretful that they had no children, for in the 1930s Beatrice wrote “My grandfather had a great wish to found a Catholic family but though my father had five children none of them have left descendants to perpetuate the name and my sister and I both unmarried and elderly are the only members of the family left.” They were certainly keen for the Mansion to be used and hopefully would have been delighted by the present day efforts of the Woodchester Mansion Trust to open the house to the public so everyone can appreciate the design and craftsmanship.