Repairs to the Brewery Gable 2020 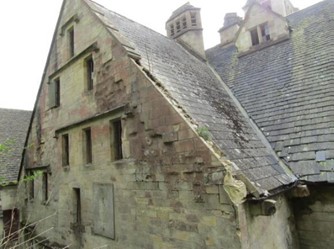 The upper part of the brewery gable wall on the N front of the Mansion is in poor condition. Temporary remedial repairs have been done by the conservation contractors Croft Construction Ltd., to stabilise the gable until funds are raised for a full restoration. The temporary measures have been largely funded by a grant from Historic England. The area has been inspected by our structural engineer, and the repair work is now finished.

The coping stones on the parapet are the main part of the problem. In the past (possibly 1950s) some of these were replaced by concrete and now others have decayed completely, or collapsed as the kneeler disintegrated. The damage on the west side of the gable is clearly shown in the top photo. There has been considerable deterioration in the stone due to water penetration, and a gap has developed between the edge of the roof slates and the inner parapet wall. There may be some movement of the wall. 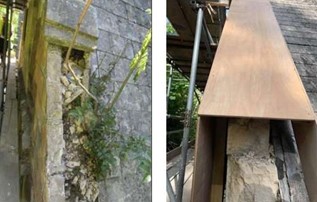 The photos show, at the top, the capping stone which is in good condition, and then the missing coping stones and invasive vegetation. This area has been cleared and covered in the adjacent picture. The three photos below show (1) open joints, (2) a view of the centre section of the wall, which should be full of rubblestone but has extensive voids, and (3), to the right, the missing kneeler on the west side of the gable.

The joints have been re-pointed and all loose stone and vegetation has been removed from the gable. The repair plan involved fitting battens to which a covering of high grade marine plywood has been attached, as seen in the photos below, and a coat of protective render has been applied in places. The covering is all designed to keep the stonework dry. 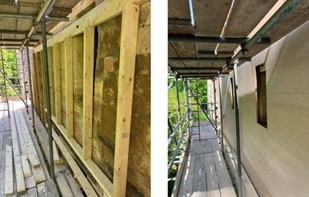 On the roof felt has been placed over the plywood and the edges sealed to the roof slates to keep rainwater out (photo below right). A hole in the roof has been sealed and internally some purlins with rot at the ends have been packed and/or propped. The windows in the brewery have been left uncovered to allow access for the bats. It is hoped that the repairs will secure the gable area until full conservation can take place. 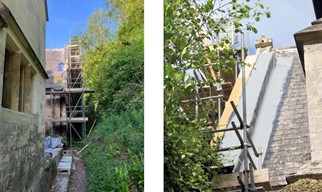