Over the years the Woodchester Mansion Trust has acquired a collection of historical material about the Mansion and the Leigh family. An important part of the collection was discovered in the attic of a house in Brighton and kindly donated to the WMT in 2005. It consisted of a box of family letters and accounts, several photograph albums, books, maps and other memorabilia. This treasure trove appears to have been preserved by Miss Beatrice Leigh, the final survivor of the five grandchildren of William Leigh, who instigated building the Mansion.

The box revealed the Leighs as real people, and just like everyone today they had their problems, disagreements, happy and very sad times, obsessions and financial crises. The serendipitous preservation and discovery enabled the human story hidden behind the empty and incomplete shell of the Mansion to be told.

Another significant part of the archive is a collection of over a hundred original drawings for the Mansion by architect Benjamin Bucknall. These were found by chance in an old trunk sold to a retired conservation officer at a sale in Leominster, and kindly returned to the Bucknall family.

The Mansion Trust has also acquired letters by architects Augustus Pugin, Charles Hansom and Benjamin Bucknall which all shed light on the development of the building.

These collections are all lodged for safety in the County Archives at Gloucester, where other documents of interest about the Woodchester estate can be found. There is more information, especially about the history of the Leigh family, in other county archives. While the Mansion is in a secluded Gloucestershire valley, it has links across the globe. Connections with the now defunct Indian Empire can be found in the British Library, and drawings of Leigh’s land in South Australia made by his son in 1852-4 are in the State Library of New South Wales in Sydney.

Here are a few of the items owned by the Woodchester Mansion Trust concerning the Leighs and the Mansion. 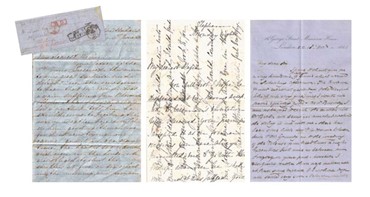 William Leigh’s son Willie was studying in London 1849-50. In 1849 he wrote to his father (centre image) asking for more money – “the last ten pounds have gone very quickly…”

By 1858 Willie was engaged to a young lady called Ada Jarrett, and many of the letters she wrote to him during their engagement were kept after her death in 1871 (left, with envelope).

William Leigh and his cousin Thomas, a London solicitor, settled the estate of their uncle Richard 1857-63, and many letters and accounts from Thomas are in the collection (right). 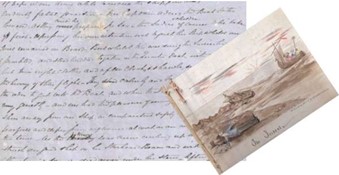 An example of how teenagers occupied themselves in Victorian times… no Facebook, Twitter or computer games. Willie Leigh’s sister Beatrice made a pretend magazine of his voyage to Australia, and it describes how he was shipwrecked on Kangaroo Island. 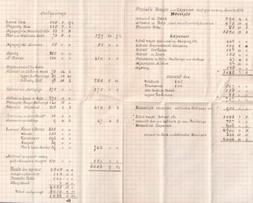 After inheriting the estate, which was entailed, in 1873, Willie Leigh borrowed excessively to pay for improvements. He didn’t understand interest payments, and was in debt by 1882, but saved by restructuring. However, there was little investment in the estate in his lifetime.

Early in 1846 William Leigh consulted AWN Pugin about repairs to the old Georgian house on the estate. Pugin advised building a new house and three of his letters to Leigh about this are in the collection (letters on left). After Leigh’s death his son consulted Benjamin Bucknall (letters, centre) and James Wilson of Bath about completing the Mansion, and a design for a new house in the Park. In 1878 Bucknall wrote his last words on the Mansion to Willie Leigh  “…a place which is associated with many happy days” (letters, right). Wilson’s (left) and Bucknall’s (right) sketches for the new house are shown.