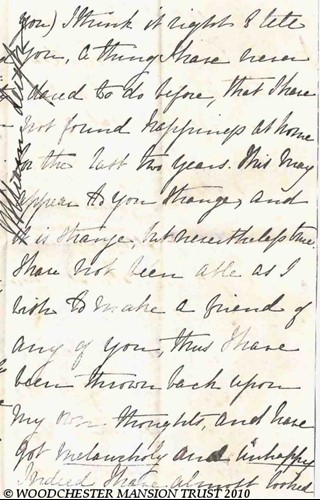 William Leigh, always known to his family as Willie, was born on 25th September 1829 at Little Aston Hall in Staffordshire. His father sent him to Oscott School but as a Catholic he was unable to attend university in England. Surviving letters show that in 1849-50 he was studying with a tutor in London. Some letters survive from this period and they show that Willie’s relationship with his father, William Leigh, was difficult at this time. In one letter he appealed to his father for more money – “I am sorry dearest Papa to trouble you so often but I want some more money, the last ten pounds have gone very quickly…”. In another he wrote to say how unhappy he had been at home in the last two years, and how sometimes he had dreaded returning. The letter obviously made an impact on William Leigh, who kept it carefully. The letter also suggested that William Leigh had not appreciated that his son was growing up, and wanted to be treated in an adult way. “I hope however dearest Papa as I am soon coming of age, I may be consulted in all your plans regarding myself, the estate, and other matters which according to the natural course of things will come to me”.

Willie Leigh also suffered from poor health, and for this reason, and maybe because of his desire to be more involved in the business of the estate, in 1852-54 he travelled to visit his father’s property in Australia. He was a talented amateur artist, and his sketch books from the trip survive in the State Library of New South Wales in Sydney. They provide a good record of the early colonisation of the country. The most exciting – and frightening – part of the visit occurred on 25th November 1853 when Willie and his companion were shipwrecked on the steamer “Osmanli” off Kangaroo Island. An eyewitness account of the shipwreck survives amongst the Leigh family papers:- “…For I was thrown violently up in my Berth a little before Midnight, and aroused to fearful consciousness in an instant by the Ship striking heavily on a rock. With a second and a third heavy shock she ground firmly & finally into her rocky cradle...” Luckily the weather was calm and Willie returned home safely. On his return he enlisted in a militia (reserve) regiment, the Monmouthshire Light Infantry, which was commanded by a Catholic and included many Catholic officers. He was expected to attend for a few weeks training each year, and progressed through the ranks from Ensign in 1854 to Captain in 1859. He resigned in 1861.

In 1859 Willie Leigh married a young lady called Ada Jarrett. She was born in Madras, India in 1841, the youngest child of Thomas Jarrett, a lawyer, and his wife Eliza Julia, nee Chambers. Ada was christened Mary Regina Victoria, names which she disliked, and was called Ada after her paternal grandmother. Her grandfather, also Thomas Jarrett, was in the service of the East India Company and retired from the post of treasurer in Madras in 1833. Her mother’s father, Lt. David Chambers, was of Irish origin, and was serving in the 89th foot regiment at the time of his premature death in 1821. His wife Hosannah, Ada’s other grandmother, was Armenian. Ada and Willie appear to have met while travelling in Europe, possibly at Baden-Baden, and were married in London on 25th June 1859, when she was eighteen. 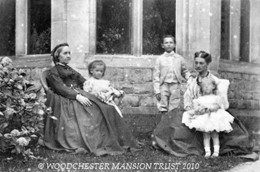 Their first child, a son called Francis William (Frank), was born in London just a year after the marriage on 4th July 1860. He was William and Caroline Leigh’s first grandchild, and was followed by four siblings. Willie and Ada spent some time in France and Italy in the 1860s, and their elder daughter Mary Blanche was born in Cannes in 1863, followed by the younger daughter Beatrice Cecilia in Rome in 1865. The second son, Henry Vincent, was also born in Cannes, in March 1867. The death of Willie Leigh’s second sister, Beatrice, in May that year may have prompted the family’s return home. They settled in Newbury and the next child, another son called Arthur Hubert, was born there in March 1869. He only survived for three months. The youngest child, Bertrand Charles, arrived in Newbury in 1871. His mother died from complications ten days after his birth, on 6th February 1871, and was buried in the family vault in the Church of the Annunciation at Woodchester. 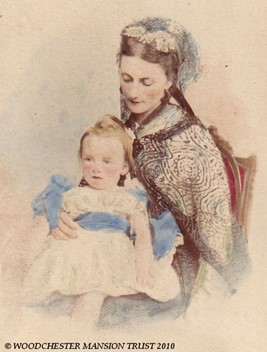 Ada Leigh’s widowed mother, Mrs Eliza Jarrett, had lived with the family and continued to do so; she effectively organised Willie Leigh’s household. Willie and his family moved to Woodchester on his father’s death in 1873 and Mrs Jarrett went with them. She had two sons in addition to Ada, Hanson and Harry. Both were army officers serving in India and after Harry’s marriage in 1874 Mrs Jarrett also supervised the care of his six sons, who were educated at Stonyhurst. They sometimes stayed at Woodchester. Letters from the 1880s which have survived show Mrs Jarrett’s interest in Willie’s children. At this time she was concerned that her granddaughters Blanche and Beatrice should receive their £5000 inheritance from their grandfather William Leigh.

After his father died Willie Leigh had to make a decision about the completion of Woodchester Mansion. In May 1873 he consulted the architect James Wilson of Bath, who estimated the cost of finishing the house as £7000. The need to complete the vaulted ceilings in the main rooms contributed significantly to this cost. 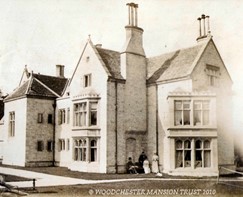 Wilson said that the site would be unhealthy and he recommended building a new, smaller house elsewhere in the park, and included an attractive design.  In 1874 Benjamin Bucknall produced a more detailed set of plans entitled “Statement relative to the question of providing a Residence”. There were three options; first, completing the west wing of the Mansion only, at a cost of some £2000, secondly, completing the west and south wings, at a cost of about £7000, and finally, a new house elsewhere in the park, costing about £5000. Option one was regarded as a preliminary step towards option two. The most pertinent comment in Bucknall’s statement was his estimate of the cost of running the finished house – “Would not such a house require an income of, at least, £8,000 or 10,000 a year?” Willie Leigh had about £4000pa from the estate, and really could not afford to finish the house. So Bucknall was engaged to enlarge “The Cottage” to fit Willie’s family, and the Mansion was never completed.

It seems that Willie Leigh toyed with the idea of completion until about 1878, when he c 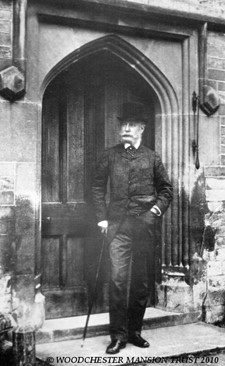 onsulted Charles Hansom. The same year there is another letter from Bucknall, expressing his regret about the condition of the house. About this time Willie Leigh borrowed money, either to finish the Mansion or to build a smaller house. However, by 1882 he was in financial difficulties, mainly because he had not considered the cost of his borrowing. The estate had to be resettled and re-mortgaged, and all plans to finish the house in Willie’s time were shelved. Willie Leigh and his daughters, who both stayed single, continued to live at “The Cottage”. His three sons were educated at Oratory School in Birmingham, where John Henry, later Cardinal, Newman was the principal. Neither Frank nor Vincent Leigh seems to have had a profession. Regrettably Frank became an alcoholic and had to be hospitalised permanently in 1899. The youngest son, Bertrand, was in the army for a while but resigned in 1897 and migrated to Australia in 1898. There is a suggestion that his resignation from the army and departure were enforced due to misconduct. He married in Australia in 1901, but had no children and died there from alcoholism in 1910.

As a result of the financial crisis in the 1880s, the estate became run down. In the early 1900s Willie Leigh was in his sixties, and his son Frank was incapable of running the estate. Willie appointed his daughter Blanche to act in Frank’s place. In 1906 she was described as a thoroughly capable business woman. She appointed Ernest Poulton as the agent, and he managed the estate and made considerable improvements, increasing the income. When Willie Leigh died in October 1906 Blanche suggested finishing the Mansion, but her plans were shelved when her brother Frank died in January 1907. He was succeeded by his younger brother Vincent. At this point Vincent moved into “The Cottage” and his sisters Blanche and Beatrice into the small lodge at Scar Hill.