Vincent Leigh was the owner of the Woodchester estate from 1907 until he sold it in 1922. Apart from the photograph of him as a baby with his mother, little is known about him until after his father’s death in 1906. Then, when his sister Blanche was entrusted with the care of the estate due to Frank Leigh’s incapacity, Vincent was described in some family papers as not of robust health. Apparently he never displayed any aptitude for business matters and was not consulted by his father about the estate. Despite this lack of interest, he took over running the property and retained Ernest Poulton as agent. He spent over £4000 on the estate while the owner, effecting improvements to half a dozen of the farms and installing a bathroom and garage at “The Cottage” and improving the access road to it. “The Cottage” was let to tenants while Vincent lived in various places – Bath, his club in London and, for a time, in the few habitable rooms at the north-west corner of the Mansion. This gave him the distinction of being the only member of the Leigh family to actually live in the house. His furniture was stored there at the time of the sale in 1922. Despite his youthful lack of interest, he appears to have taken his responsibilities as owner of the estate seriously.
However, Vincent Leigh seems to have been inclined to be litigious. There are records of several disputes that came to court during his tenancy of the estate. There were squabbles over timber sales, with tenant farmers who sublet cottages, and a bitter dispute with the tenants of “The Cottage” who were asked to leave because they were not using the Catholic chapel in the house, in violation of the terms of their lease. Vincent’s sisters Blanche and Beatrice were, like their grandfather William Leigh, very zealous Catholics and the extent to which they were driving this issue was unknown. There also appears to have been great animosity between Vincent and his sisters, including an exchange of solicitors’ letters, when he sold the estate in 1922.
The property was bought by John Henry Tooley, who was a stockbroker in Malvern. He had family connections in Stroud and had worked there as a solicitor’s clerk some twenty years earlier. He appears to have made Vincent an offer for the estate, although to what extent Vincent had been seeking a buyer is not known. There is no evidence that the estate was put on the open market. Clearly Tooley’s aim in purchasing the land was to sell off the outlying farms, particularly those down in the valley around Frocester where rents on the rich land were twice those on the Cotswold escarpment around Nympsfield. Indeed one farm changed hands on the same day as the estate was sold.

As heir to the estate, Vincent benefitted from the revenue from the sale for his lifetime. Under his grandfather’s will, he 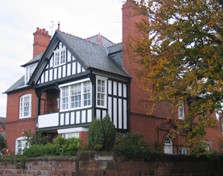 also had the right to decide how the estate should be disposed of in the event of him having no male heir. A bachelor, Vincent married late in life, at the age of 56 in 1923. His new wife, formerly Miss Ethel Mary Eaton, was a Catholic who lived in Chester. Vincent lived there with her for the rest of his life, dying at 5, Greyfriars in January 1929. His obituary in the Chester Chronicle described him as “...of a retiring disposition and took no part in the public life of the city, but in private life he had many friends”. His will included donations to many charities, amongst them £100 to both the Battersea Dogs Home and the National Trust.