The Lucky Severn Lottery is a weekly community lottery raising money for good causes in the Stroud area. Tickets cost £1 and the big prize is £25,000.

You can nominate the Woodchester Mansion Trust to receive 50p for every pound you spend with the lottery, and the Trust also receives a share of a further 10p in every pound which is allocated across all the charities taking part.

The Trustees see this local lottery as a useful way of boosting income, to meet the massive conservation costs. They very much hope that all visitors to the Mansion and supporters of the Trust will join in - the Mansion will definitely be a winner and you may be too!

You can see from the list below that our supporters are rewarded - and the Mansion benefits too. If you're a former volunteer, or a regular visitor to Woodchester Park, please consider buying tickets. Click here! Thank-you. 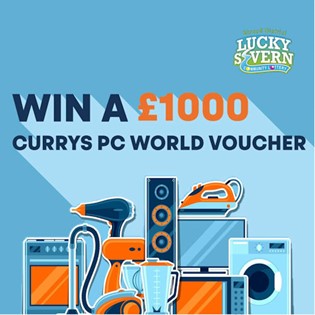 If you buy a ticket for the draw before 27th August, there's a chance to win a £1000 Curry's eGift Card. This can be used on a range of goods throughout the store. 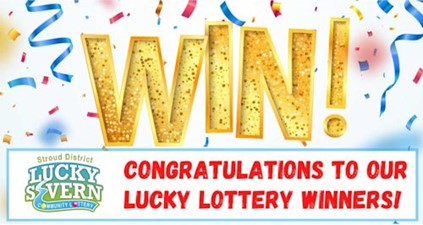 In the inaugural draw on 20th March one of our supporters, lucky Mr S from Stonehouse, won a second prize (3 extra tickets). Congratulations! The Mansion Trust benefited by £30 and we met our target of selling 50 tickets. We hope this will continue, indeed we hope to do better in the future.

Since then Mr P from Stroud has also won extra tickets, as have one of our trustees and Mr B from Stroud and Mr G from Stonehouse!

And in the draw on 15th May another of our trustees struck really lucky, matching 3 numbers and winning the top prize of £25!

3rd July - another 3 free tickets, once again won by a Mr W from Stroud. The W's supporting Woodchester seem to be the lucky ones!

4th Sept - two of our volunteers, both Ms G's, struck lucky this week with 3 free tickets each!

23rd Oct - the 3 free tickets went to Ms D from Wotton-under-Edge, a volunteer for 20 years.

6th Nov ...and she won three more this week, as did Ms G from Stroud!

29th Nov - this week's winner is former volunteer Mr A from Stroud.

4th Dec - Mr G won 3 free tickets! He's one of our longest-serving volunteers, he's been helping us for about 30 years. Thank-you Mr G! Two other winners this week - Mr L and lucky volunteer Ms P, who's won before and this time had six free tickets. A good week for Woodchester supporters.

11th Dec - another 3 free tickets for Mr G! And Ms G from Stroud was even luckier, winning a £25 second prize. The Mansion was lucky too, as Ms G has donated her prize to the WMT. Thank you Ms G - we very much appreciate your kind gesture.

1st Jan - Mr W from Stroud volunteered with us for many, many years and made a big contribution to the Mansion in that time. He's continued to support us by buying tickets so we're very pleased that he won three more in the first draw of the year. Well done and thank-you Mr W!

22nd Jan - supporters Mr G and Mr P, both from Stroud, were lucky with 3 extra tickets this week.

5th Feb - Mr G won again, this time a £25 prize which he has kindly donated to the Mansion. Thank you! Our volunteer Ms P also won £25, and long serving volunteer Mr G had 3 free tickets.

12th Mar - a good week for our supporters. Mr W of Stroud, who's given a huge amount of time and support to the Mansion over the years, won £25! Thank you. Mr G of Bristol has also supported us for a long, long time, he's been volunteering with us since the early 1990s, and has won three free tickets (again). Ms G of Gloucester, another wonderful volunteer, has also won three free tickets - for we think the fifth time!

19th Mar - two of our trustees and one of our office staff all won three free tickets this weekend - a reward for lots of hard work.

7th May - Mr C was even luckier with a £25 prize which he donated to us. Thank you. Long-standing supporter Mr W from Stroud won 3 free tickets - for the seventh time.

21st May - trustee Mr M of Stroud received a £25 prize, which he kindly donated to us.

4th June - our trustees are still on a winning streak - Mr G had 3 free tickets this week.

9th July - And again - Mr W of Stroud was lucky and won three free tickets for the eighth time. Ms G of Gloucester is the runner-up in the supporter-with-most-prizes stakes with a sixth win of 3 free tickets.

16th July - this week our wonderful employee Ms B, who holds the Mansion office together, deservedly won three free tickets.

Tickets can be purchased online here. When you play, be sure to scroll down the page, find the WMT logo, and click to support us.