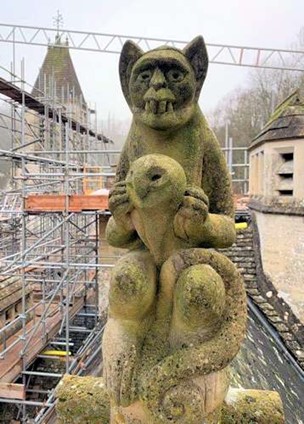 This winter the leaky Ironing Room roof and part of the North Range roof and the chimneys are being repaired, thanks to a grant from the Heritage Stimulus Fund, Historic England and the Historic Houses Foundation.

The first picture shows the hunkypunk on the E gable of the N range. It was carved about 10 years ago by sculptor Jitka Palmer. Hunkypunk is a Somerset vernacular term for a grotesque - a decorative architectural feature.

Work started with the erection of scaffolding, to support a temporary over-roof which protects the old building and workmen from the winter weather. The over-roof is like the corrugated iron roof over the chapel, but larger. Progress is shown in the images below, including the start of repairs on the north range chimneys. 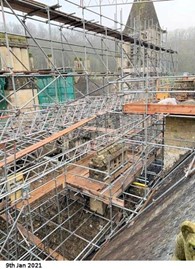 The picture above is taken from the top of the E gable on the N range. The clock tower is approx. centre top, the chimney above the laundry room (chimney 8) centre at the right side, and at the very bottom right the ear and eye of the hunkypunk on the E gable are visible. In the centre about a third of the way up is the ventilator from the game larder. 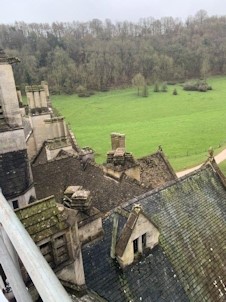 The scaffolding offers some new views from the Mansion; the photo above looks in a south westerly direction, across the brewery roof at the north western corner of the Mansion and the small NW wing, to the Park beyond. The over-roof is now in position, and the two images above show it from underneath and looking down on the top surface. The view of the over-roof from the carpark to the east of the Mansion is below. We had a small snowfall on 10th January which luckily only disturbed work for a day. 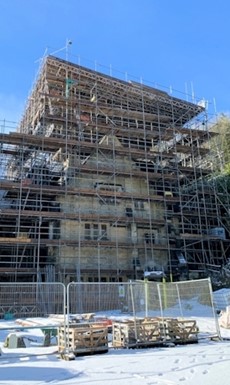 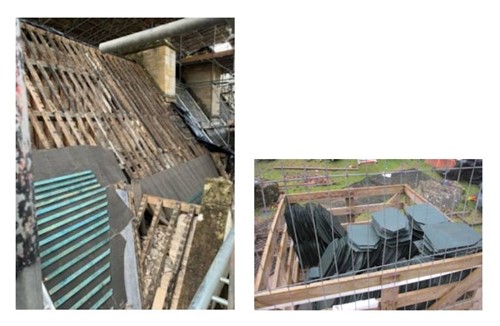 The image above shows the start of the roofing work, with tiles stripped off the south facing side of the N range. It will be redone in green Westmorland slate, which really is green, as can be seen from the picture of the new tiles waiting to be used. 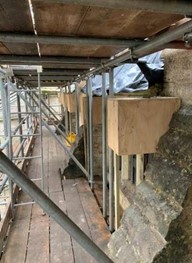 Another decorative feature at the Mansion is the ten carved owls supporting the gutter in the courtyard (upper picture). As you can see from the lower picture, they have been boxed up for the duration of the works.

Work is now proceeding rapidly with stripping off the old roofing and re-tiling. The image on the left shows the east facing side of the ironing room roof, that on the right the south facing end of the north range roof by the east gable (the hunkypunk can just be seen at the top right). The torching beneath the slates has been revealed in the lower part of the picture. This is lime mortar applied to the space between the wooden laths, from the inside of the completed roof, to prevent draughts and the tiles lifting in high winds.

Re-tiling of the side of the north range facing into the courtyard has now begun. The picture above, taken facing approximately west, shows progress in the area between chimney 6 and chimney 7, whose repair is also included in the project. The new green slates can be seen to the bottom left. Above left we can see the start of repairs to chimney 8, a large stack with eight vents. It is shown almost finished on top right in the righthand image, with the ventilator from the game larder with its new capping stone to the bottom left. Note that at the moment the chimney has a canvas covering to protect the lime mortar from frost and to encourage it to dry out steadily.

Getting on! The new slates are progressing steadily. Chimney 6 (above) is on the edge of the area being re-roofed and has six vents including the one from the old kitchen in the Mansion. It is in very poor condition, and we have been fortunate in securing a small further grant from Historic England to undertake repairs while the main scaffolding is still in place. 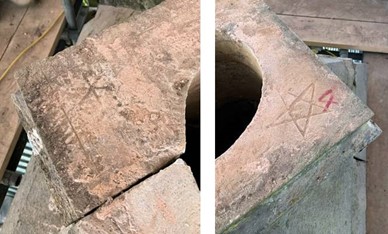 Two masons' marks were discovered on the chimney. They are not very common in the Mansion and both are on good stone which will be retained during the conservation. So they will not be on view to the public in future. The image above left, taken inside the ironing room, shows the elegant central column supporting the roof. There are pointed arches on either side of the column, which are supported on the outside by the east and west walls of the room. The roundel above the top of the column sits under the apex of the roof, with the tops of the two arches on either side. The photo on the right shows an unusual view of this roundel (circled) from the outside - only possible as the roof slates have been removed. The ironing room roof is now completed. The image above shows the finished work from the east. The west side is currently hard to see, as it's covered in scaffolding, but the unsightly corrugated iron patching has vanished! The new green slates on the N range. In the left-hand photo the roof is viewed looking NW. Again you can see chimney 8 and behind it, the smaller chimney 7 is just visible. On the right the photo has been taken looking N and up to the hunkypunk on the NE gable. The grant includes funding to repair the stonework and glazing in the first and second floor corridor windows at the east end of the south range. Progress is shown in the pictures above (taken from outside the Mansion at the end of March). The more ornate first floor window is on the right. 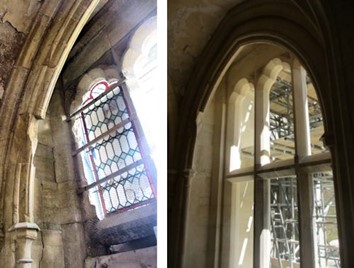 The image above left, taken inside the Mansion mid-April, shows the first floor window before repair, and on the right repaired, but awaiting glazing. The second floor window before repair (on left) and showing improved condition afterwards (on right). 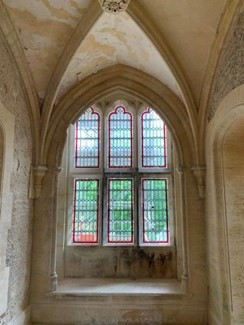 The coloured stained glass has been reinstated in the first floor window. 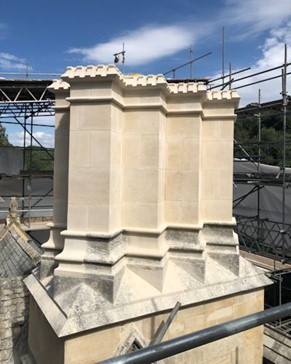 Chimney 8 - above - is now revealed! The stack is about ten foot high. Work has been slowed due to delays in stone supply for chimneys 6 and 7, but it has now arrived and we hope that the whole project will be completed soon. June 2021. The over-roof has been removed. In the image above you can see the finished chimneys 7 and 8, from up on the scaffolding in the courtyard. Beyond them chimney 6 is still under repair. Stone has arrived, the base is complete and the six interlocked stacks are starting to go up.

The work should be finished and the scaffold all down by the third week in July. The easternmost chimneys are now visible from ground level as the scaffolding is taken down. Work continues on chimney 6; it has slowed a bit due to the virus but we are hopeful all will be finished by the end of the month. Chimney 6 (furthest from camera) is complete and the final areas of roof around are being finished. The scaffolding should all be gone in two weeks. The photo clearly shows (centre) the green slate replacing the original on the north range and, to the left, the new Cotswold stone slates on the east facing side of the ironing room roof.

14th August - the courtyard side Looking across the courtyard from the S range, you can see the three restored chimney stacks (from left to right, numbers six, seven and eight) above the new green slate roof on the N range. To the right is the new Cotswold stone slate roof on the ironing room, surmounted by the air vent from the game larder.The scaffolding is now on its way down! 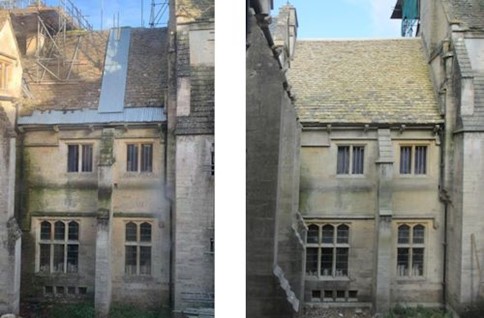 The ironing room roof - before and after repair.

The scaffolding has all gone. Work finished! Click here for more images.

Thank-you to Max our site manager, our architects, Donald Insall Associates, David Price from the HHF and several volunteers for the photographs used above.

We are now open on Fridays, Saturdays and Sundays 11am-5pm.

Upcoming events at the Mansion